pISO: "The Most Versatile Flash Drive Yet"

Update. pISO has been fully funded and is on its way to 500 units! Thank you for everyone who has supported the project!

Greetings. piDAY 2018 was an exciting day with the announcement of the start of my first kickstarter project! A couple of months back a friend and colleague of mine Adam Schwalm asked me to to help design a PCB hat that will fit on a Raspberry Pi zero. The board will allow a user the ability to plug the Pi into their computer and use it like a USB Flash drive. However, this is no ordinary flash drive. The user can easily partition the SD card on the Pi into virtual drives of different formats. The advantage of this is the ability to have one flash drive that can be used between different operating systems without the need to reformat the drive. And that is not the only feature the pISO offers. With the pISO creating bootable disks is a breeze. By creating a folder on one of the virtual drives called 'ISOS', you can simple drag an ISO disk image into the folder, select that ISO and boot your computer.

The pISO hat is very easy to install and use for anyone. Simply line up the pISO to the bottom of your Raspberry Pi zero, insert the 4 included screws and tighten. The pISO is then ready to be inserted into your USB port on your computer. Soldering is not required because the pISO hat uses POGO pins to make the electrical connections to the Raspberry Pi. When the pISO boots, a splash screen will show "loading". Then you can create or select a virtual drive with the up/down/select buttons right on the board. The pISO is also thin enough to work on most laptops at around 7mm-8mm thick. 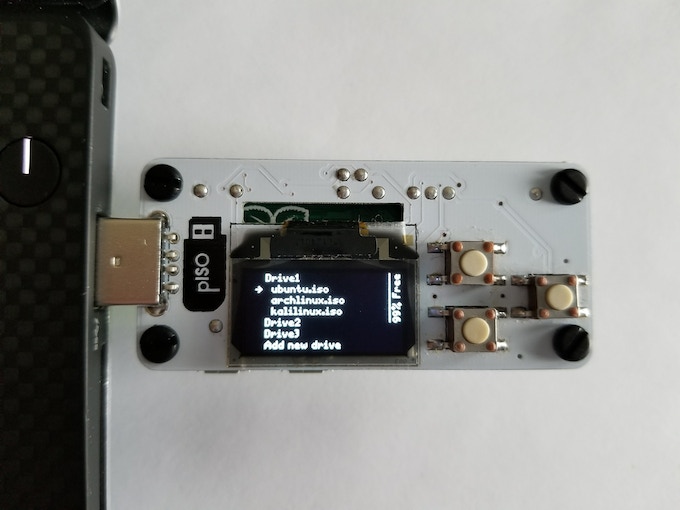 Our Kickstarter goal runs until April 13th 2018 and the campaign is for approxamelty 250 pISO's. For more information, or to help support the pSIO, see the link below.